“Poor People: A Stage Adaptation of Fyodor Dostoyevsky’s Novel Poor Folk written by Lavinia Roberts and created/directed by Irene Kapustina is a detailed and heartfelt encounter with loneliness and longing that draws shockingly strong parallels between 19th century St. Petersburg and 21st century New York. The struggle to make it through today. The struggle to imagine a bright tomorrow. Too many people, but few friends. Too much work, but little money.

The production is unapologetically cold and minimal — an exact mirror of the lives of the characters. Lavinia Roberts’ script is beautifully written bringing colorful words to an otherwise gray world. This adaptation, told primarily through letters and silent dream montages, brings Dostoyevsky’s characters to life. The characters share the stage, share dialogue, share their homes, their work, and their hopes for tomorrow but they never seem truly together. They are all alone. “ 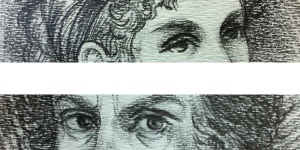